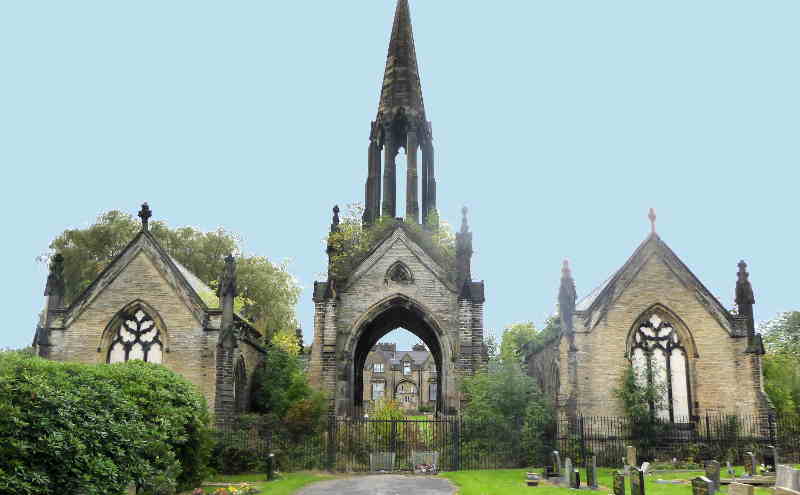 Demand for burial space in Huddersfield, in common with other towns and cities in the 19th century led to the creation of Municipal Cemeteries. As seems to be the norm in those days, the establishment of the cemetery and its buildings was not without controversy. The first sod on the site at Edgerton was turned on 13th September 1852,which also happened to be the day Sir J. W. Ramsden celebrated his coming of age. The Ramsden family being the freeholders of the majority of the town at that time. The event was reported in the Huddersfield Chronicle and West Yorkshire Advertiser in some style:

“Turning the First sod of the Cemetery, and Dinner of the Improvement Commissioners and Magistracy

At five o'clock a special general meeting of the Huddersfield Improvement Commissioners was held in the ground intended for the new Cemetery at Edgerton, for the purpose of receiving and taking possession of the 12 acres of land from the agents of Sir J. W. Ramsden, and turning the first sod of the New Cemetery. Though the rain was incessant and heavy, there was a very numerous attendance of commissioners; and shortly after the hour named, George Loch, Esq., with a new and beautiful spade provided by the Commissioners for the purpose, dug up a sod, and presented it to Joseph Brook, Esq., the chairman of the Commissioners, saying that he in the name and on behalf of Sir J W Ramsden, delivered up possession of the plot of ground on which they were standing, to be appropriated and used, and kept sacred as a burial place for the dead of the township of Huddersfield for ever. Mr Joseph Brook accepted possession in the name and on behalf of the Improvement Commissioners and the inhabitants of Huddersfield; and after congratulating the Commissioners on the success which had attended their efforts to provide a large and well-appointed burial-place for the inhabitants of this important district, and that too in despite of the numerous and peculiar difficulties which had beset their path, he expressed a fervent hope and belief that their undertaking when completed, would, under the blessing of God, prove to be of benefit to the district both in a sanitary and moral point of view.
He also bore his personal testimony to the anxiety evinced by the trustees of Sir J. W. Ramsden that appropriate provision should be made for the interment of the dead; and instanced their liberal donation of one half the cost of the land, or £1777 for the purpose of beautifying and decorating the New Cemetery, in proof of their desire that the new burial-place for the dead should be inferior to none in the kingdom.
Mr Loch briefly acknowledged on behalf of the trustees the testimony borne to their efforts and intentions by the Chairman of the Commissioners; and also gave expression to a fervent hope that the undertaking then commenced would long continue to be a benefit to the town, and worthy of the public spirited inhabitants of the district.
The Commissioners and other gentlemen then proceeded to the George, and sat down to a sumptuous dinner. Invitations had been issued by the chairman of the board to the magistrates of the district, the following letters of apology had been received:-

Fenay Hall, 13th September, 1852.
Dear Sir,_ I am greatly obliged by the invitation from the Huddersfield Improvement Commissioners, to dine with them on the 13th instant, the day on which Sir J. W. Ramsden attains his majority, and I greatly regret that my suffering from sciatica, rheumatic gout, will prevent my having the great pleasure of making one of their party on that day.

Other letters in the same vein followed.
In March 1853 the Improvement Commissioners advertised for tenders to be submitted for the construction of Enclosure Walls and the Cemetery Chapels. It was these two chapels that were to become the subject of much controversy. In 1855 the paper reported “Settlement of the Cemetery Dispute”. Apparently the Bishop of Ripon was satisfied that the dispute in reference to the position of the two chapels had been settled. The dispute arose as to whether a church chapel should or should not be connected with a dissenting chapel by means of a crowned arch.
The report includes:

“To have gone into a court of law to decide the question whether a church chapel should or should not be connected with a dissenting chapel by means of a crowned arch, would have added little to our church or chapel consistency in the face of the fact brought out at the Commissioners' meeting, on Wednesday, to the effect that there are grave-yards in the centre of the town of Huddersfield, where every fresh interment is made by disturbing and mutilating some previous occupant of the soil, where the bodies lie so near the surface........
However, by mutual concessions, the scandal of legal proceedings on such a topic at such a time is to be avoided. To please the fancy or meet the consistency of a section of the church party in the town, the Improvement Commissioners have agreed to detach the two chapels from the main or central tower by a foot- a veritable twelve inches on each side. By this means it is considered that the church will not be contaminated by a brick and mortar connection with dissent, and as the dissenters do not consider that they will be damaged by this foot of separation from the mother church, all parties will be satisfied, and none injured by granting the concession. ....”

In October 1855 the following advert was in the paper:

OPENING OF THE CEMETERY AT EDGERTON.
The public are respectfully informed that the above CEMETERY will be OPENED for Interments by the Improvement Commissioners on Monday next, the 8th Instant, when Divine Service will be conducted in the Chapel built upon the Unconsecrated portion of the Ground by the following Ministers:- Rev. J. HUDSTON, Rev. J. CHISHOLM, Rev. J. K. MONTGOMERY, and Rev. J.STOKOE.
The Improvement Commisioners will meet at the Commissioners Offices, No. 1 South Parade, at Ten a.m. And will walk in Procession to the Cemetery; and they respectfully invite the Ratepayers to join them in the Procession, and for that purpose to meet them at the Commissioners' Offices at the time named.

On the following weekend the Preston Guardian reported:

The Huddersfield Cemetery.- On Monday last the public cemetery at Edgerton, for the Township of Huddersfield, was formally opened for the purpose of Interments. The cemetery contains some 12 ½ acres, surrounded on three sides by a stone wall, and on the fourth side a dwarf wall, with handsome railings and stone pillars. The cost of the cemetery, including land and enclosing, the chapels (two), lodges, formation, and planting, closely approximates £13,000.

To join or renew membership of the Society please click here

This website uses cookies to improve your experience while you navigate through the website. Out of these cookies, the cookies that are categorized as necessary are stored on your browser as they are essential for the working of basic functionalities of the website. We also use third-party cookies that help us analyze and understand how you use this website. These cookies will be stored in your browser only with your consent. You also have the option to opt-out of these cookies. But opting out of some of these cookies may have an effect on your browsing experience.
Necessary Always Enabled
Necessary cookies are absolutely essential for the website to function properly. This category only includes cookies that ensures basic functionalities and security features of the website. These cookies do not store any personal information.
Non-necessary
Any cookies that may not be particularly necessary for the website to function and is used specifically to collect user personal data via analytics, ads, other embedded contents are termed as non-necessary cookies. It is mandatory to procure user consent prior to running these cookies on your website.
SAVE & ACCEPT