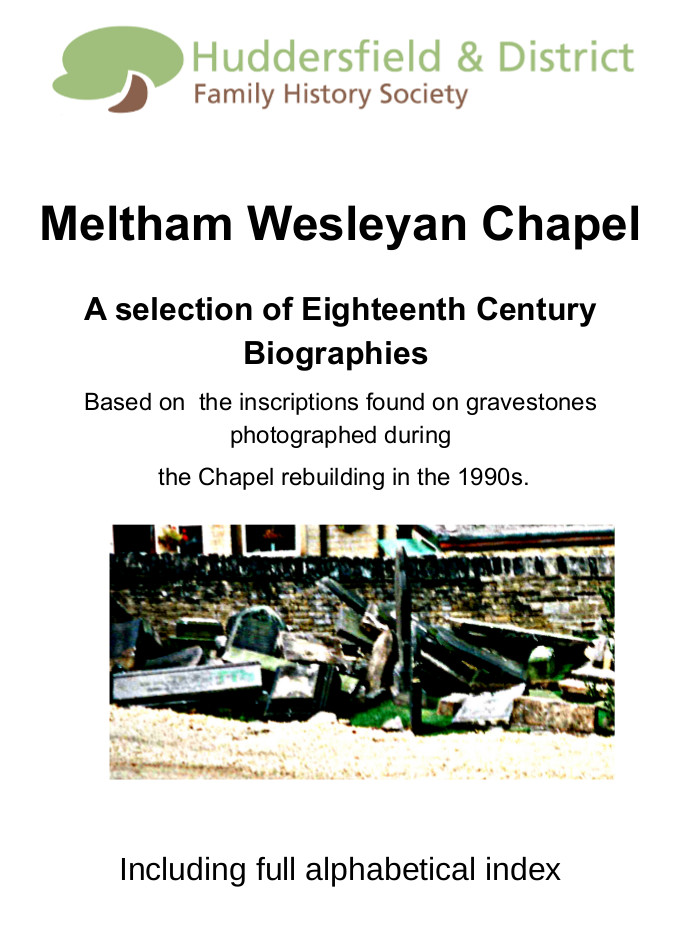 The introduction gives a brief summary of what this 76 page book is about:

Methodists initially met at local cottages in the Meltham area before forming a society in
1797. Originally built in 1819 as the first Wesleyan Chapel in Meltham, it later became a
Sunday School and Assembly Rooms when a new chapel was built on an adjoining site in the
mid-1880s. This is the chapel indicated on the 1904 map, which was built on adjoining land
between 1884 and 1886 at a cost of £4,000. The original chapel then became the Sunday
School and Assembly Room.
The second chapel was demolished in the mid-1970s and replaced with the current modern
building whilst the adjoining 1880’s chapel is now in commercial usage. Around the time of
this redevelopment gravestones around the chapel were removed. Whilst this work was in
progress a pile of the headstones were photographed by Alan Starkey, currently the Society
Data Manager.
These photographs were recently passed to me and I managed to transcribe the majority of
the inscriptions on twelve of the headstones. Studying the inscriptions highlighted the number
of infant deaths that had occurred in the nineteenth century. I wondered if these families also
had other children that lived into adulthood so decided to research their family history.
Thus what started out as the publication of a small group of transcriptions turned into an
interesting cross section of the Meltham population. The families all had a Wesleyan
connection in some degree and includes the story of a Wesleyan Minister, born in Meltham,
who started his working life as an apprentice tailor in Holmfirth and then became a Minister
whose postings took him the length and breadth of the country.
The index contains over 500 names of which Taylor with 68 is the most prolific followed by
Wright 51, Mitchell 42, Hirst 32 and Brook 24.
My research is what might be termed ‘First Level’ so before accepting this research as being definitely correct it is advisable to check other sources to confirm the details.

This website uses cookies to improve your experience while you navigate through the website. Out of these cookies, the cookies that are categorized as necessary are stored on your browser as they are essential for the working of basic functionalities of the website. We also use third-party cookies that help us analyze and understand how you use this website. These cookies will be stored in your browser only with your consent. You also have the option to opt-out of these cookies. But opting out of some of these cookies may have an effect on your browsing experience.
Necessary Always Enabled
Necessary cookies are absolutely essential for the website to function properly. This category only includes cookies that ensures basic functionalities and security features of the website. These cookies do not store any personal information.
Non-necessary
Any cookies that may not be particularly necessary for the website to function and is used specifically to collect user personal data via analytics, ads, other embedded contents are termed as non-necessary cookies. It is mandatory to procure user consent prior to running these cookies on your website.
SAVE & ACCEPT